Arizona State University Professor James Sulikowski has been studying sharks around the world for more than 25 years and is a frequent contributor to the Discovery Channel’s Shark Week series. So when a 63-year-old woman was killed Monday, July 27 — the first recorded fatal shark attack in the state of Maine — national news media including the New York Times and ABC’s Good Morning America contacted Sulikowski for his expertise.

Through his work with the Sulikowski Shark and Fish Conservation Lab in ASU’s New College of Interdisciplinary Arts and Sciences, Sulikowski and his students use innovative technologies such as ultrasounds and satellite tags to follow pregnant sharks across vast swaths of Earth’s oceans. He will also teach a course on sharks this fall, "The Biology of Sharks, Skates, and Rays."

Answer: Anytime there’s a fatal shark attack, it really gets people’s attention. It’s terrible, its horrific, but it is also extremely rare. People didn’t understand that white sharks have been living there forever, since long before people settled there. And there haven’t been any (recorded) fatal attacks in all that time. So, it really tells you that we are not on their dinner plate. There are sharks all across the water, really close to shore all the time. When you think about all the hundreds of millions of people that are in the water year-round, and maybe a hundred are bitten and maybe 10 die, it gives you a sense of how rare those interactions are.

Q: Reports indicate this recent attack occurred only about 20 yards off the beach in Maine. How typical is it that sharks wander that close to the shore?

A: Very typical. You have to understand that the Maine coastline is very different there as compared to Florida or Southern California where 20 yards out into the water, it may only be waist deep. But in that part of New England, you may be in 50, 60, 70 feet of water; it drops off very quickly. Each one of those areas has a different sort of shark population. And in Maine, it just happens to be the biggest and the baddest, the white shark, that are coming close to shore.

The problem is we are coastal people; we like being in the water. We like swimming around; we like enjoying the water. It just so happens there are also lots of other things in the water that live there. Seals are one of those, and seals are the primary food for white sharks. So white sharks come close to shore to feed on seals. We’re in the water, we’re close to shore and sometimes get caught in the middle between sharks and their seal prey.

Q: Is this increased shark activity typical for this time of year, or is something driving unusual behavior?

A: This is very typical for this time of year because there are so many more people in the water, and the more people, the more interaction chances occur. In general, there are always apex predator sharks in the water and some of those are a lot closer than you would ever imagine.

Q: What is an apex predator and how may that be a threat to people?

A: Apex predators are at the top of the food chain, and they serve a very important role in culling out the weak, the sick, the dying populations of prey and keeping them from overpopulating and eating more than they should. For sharks, those prey are seals, which can have a very similar size and mass to a swimming person. But we are not as nimble in the water. Our swimming actually mimics a seal in distress as we splash around. Those sound waves attract sharks. Even worse, sharks are attracted to shiny things, like fish scales reflecting the light — so a watch, or jewelry or maybe even a necklace can make us look like something that’s ringing the dinner bell for larger predators like sharks.

Q: In your experience, are certain species of sharks more or less aggressive than others? And do those species present a realistic threat to humans?

A: There are really just three species of sharks that are known to fatally attack a human and these three are the primary offenders of any fatalities that occur anywhere in the world: tiger sharks, white sharks and bull sharks. But all the rest of the sharks out there are under 5 feet in length and the vast majority are under 3 feet long. These little guys are absolutely no threat to us in any shape or form. Those mid-level sharks, 5- to 7-feet-long, are notoriously good at exploratory bites — just biting and letting go. So, all these bites we’ve seen recently around Florida are these sharks that are just checking out, say, a dangling foot in the water that may have something shiny on it. As soon as they bite down, it’s like, “Oh, this is not what I want,” and they move on. 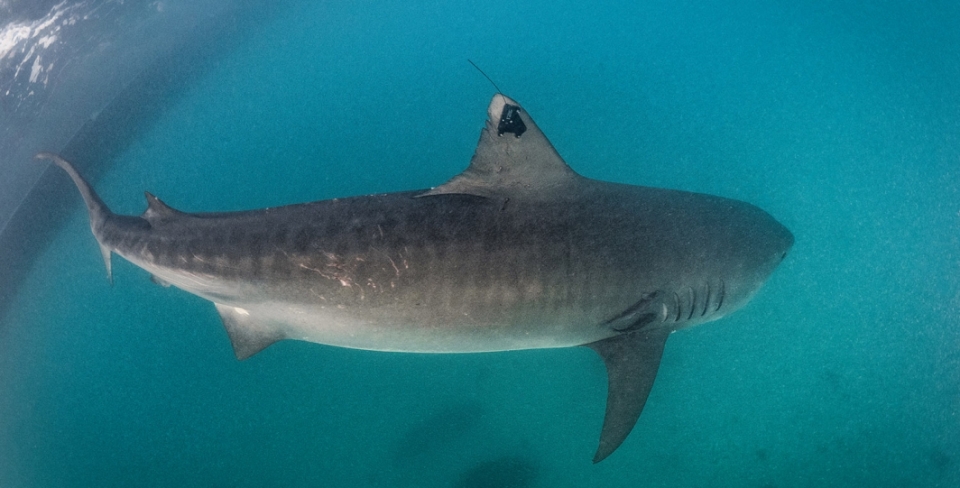 But sharks have a conveyor belt of teeth. Every month they grow a new set of razor-sharp teeth than can absolutely slash through us like a hot knife through butter. Their behavior is really just based on seeking food and people just accidently get in the way. Of all the sharks, only bull sharks are known for being sort of territorial and can be the most unpredictable of all sharks. And they can be found close to shore and can pose a real problem for people if they’re swimming in murky water and are accidentally mistaken for food.

Q: As some shark species are threatened, does human behavior actually present more of a threat to their survival?

A: Absolutely, both directly and indirectly. While things like climate change impact sharks indirectly, people kill sharks at an astronomical rate compared to human fatalities. For every person killed by a shark each year, somewhere around 11 million sharks are sacrificed or killed, so yes, humans are a much bigger threat to sharks than they are to us.

Q: What are some easy ways to reduce the chance of being on a shark’s dinner plate, short of just avoiding the ocean altogether?

A: Step No. 1 is to simply avoid hot spots where sharks are active close to shore. On popular beaches, lifeguards put out flags or you can just ask them. If there are seals or a lot of fishing in the area, watch out. Do a little bit of research before you venture into a new area.

Second, stay out of the water between dusk and dawn. Sharks have incredible night vision that allows them to be successful predators in the dark.

And third, avoid wearing shiny objects, particularly in southern, warmer waters. That’s where there are a lot of smaller sharks are known for investigating by biting. They’re going for the shiny objects that can look like a floundering fish.

These are the important things anybody who likes the water can do. But it really depends on where you are. In some places you might not want to go into water more than waist deep. But most importantly, just be diligent, know your surroundings and stay away from hot spots.